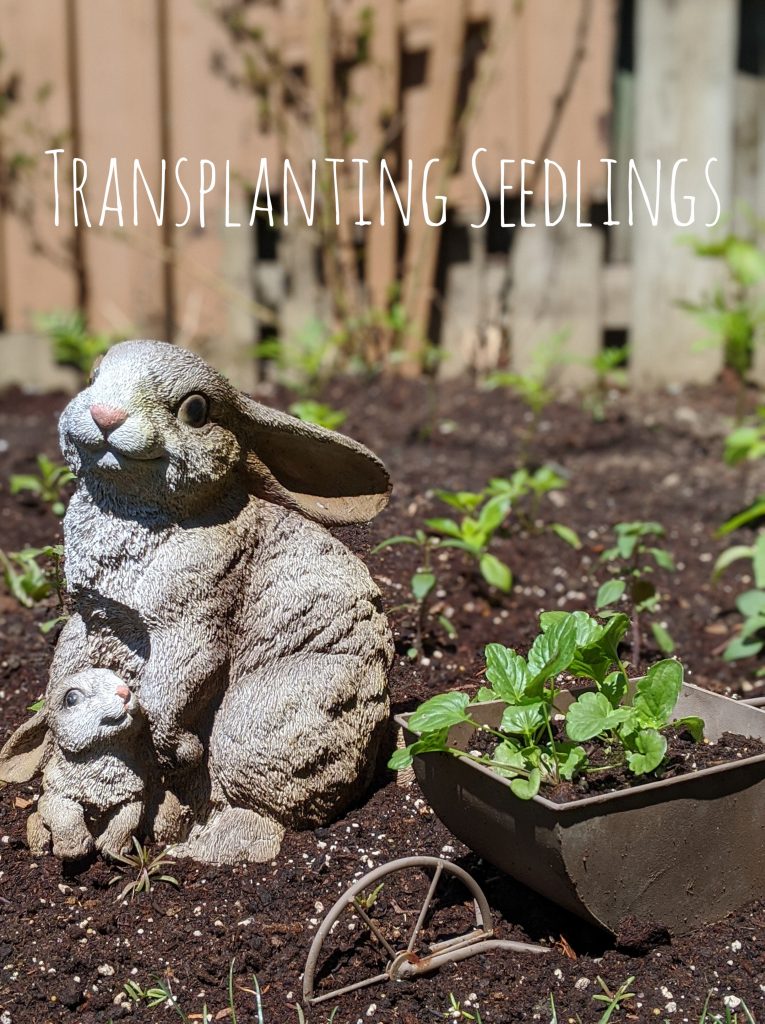 As promised, here’s part 2 of my flower garden adventure!

I think we last left off with me thinning and transplanting the little seedlings into bigger grow bags. Unfortunately, I lost a few of each type of seedling afterwards. They were probably just too young or delicate and couldn’t survive the process. But that’s why you plant a bajillion seeds, am I right!?

A little bit of a disappointment, though, is that I lost nearly half of all my snapdragons after the transplant. I have no idea why. They kind of just withered away. Maybe someone can let me know, are snapdragons particularly delicate? On the plus side, apparently the ones that survived are exceptionally strong. They are some of my biggest seedlings now!

Also, side note, in case you’re curious about the portulaca (you remember, the tiny, tiny seedlings that I weren’t sure were gonna make it or not ’cause I had never seen a portulaca before and they were soooo small….) they are doing great now! They look more like what I imagined the seedlings should look like.

While I waited for the weather to warm up, I decided to draw up a kind of garden plan in what I call my “Idea Book.” It’s just this sketch book where I draw out all my DIY ideas, blueprints, room designs, you name it. I find it really helpful to have a visual reference for what I come up with in my head. It’s kind of a step towards finding out if my ideas could actually work or not! Here’s my drawing, in case you’re curious.

Although I found this exercise very helpful in organizing my ideas for the garden, I actually won’t be following this plan. After thinking about it more, I decided to do a few things I hadn’t anticipated at the time I made my drawing.

Firstly, none of the phlox seeds germinated, so that was multiple sections that had to be nixed! Secondly, I decided to expand the garden bed quite a bit. This is what the garden bed looked like when we moved in.

We had already expanded the bed by a bit in previous years, but this year, I really wanted to go all out and make a lush, overflowing flower garden! You can see where the edging is in the soil, that’s where the flower bed used to end, after we expanded it the first time.

It was actually kind of hard to plan the expansion. I had lots of ideas, but of course, due to the pandemic, I couldn’t exactly head off to the garden centre for supplies. I had ordered my seeds online in February and an arbour in March. And besides that, I had just what was left over in my shed to play around with.

I had so many ideas! A little portion of raised garden bed with a brick retaining wall, a stone bird bath, climbing roses on the arbour….Alas, those ideas will have to wait until next year. Or possibly later this summer, who knows? Anything can happen.

And as it turns out, scaling back my plans was probably a good idea, because between digging out the sod, transplanting some of my existing perennials, reinstalling the bird bath and edging….it’s actually been a lot of work. And I had a lot of great stuff in the shed already. I just got creative and figured out how to spice up the garden in other ways.

I also ended up installing some bricks along the middle of the bed to use as a walking path. Since I made the bed so deep, I knew I would have to be able to get to the plants in the back somehow, so I just used a bunch of leftover bricks from our shed that the old owners of the house left behind.

As all this garden prep was happening, I also started hardening off the seedlings in early April (aka. bringing the seedlings outside for an increasingly long amount of time to acclimate them to not being indoors anymore). Although our weather’s been quite warm this spring, it’s also been rather inconsistent. Our snow’s been gone for most of April and some days were quite sunny and nice, but then there have been days of brisk cold, heavy rain, heavy wind, hail, and even random “snowstorms” lasting only five minutes, while the sun was still shining!

So unfortunately, I wasn’t able to bring the plants out to harden off for more than two days in a row. And some days that started out calm and sunny, turned dramatically cold and even snowy without warning. I think some seedlings ended up getting a bit wind burned or something. By the way, is that what these white spots on some of my plants are? I am only assuming it is wind burn, but can someone confirm this?

Something’s also happened to a number of the zinnias. The leaves got these yellow splotches and then dried out. I am not 100% sure why, maybe it’s fertilizer burn? Anyway, I’ve been removing the affected leaves because the plants seem to be doing fine otherwise!

And finally, only a few days before I ended up transplanting everything into the garden, I also lost quite a few English daisies to under watering. They just kind of flopped over and shrivelled up. Oops!

Despite these losses and the weird issues with some of the seedlings, they seemed, generally, to be doing quite well. I kept them under the grow lights for about 16 hours a day, fertilized them with diluted Miracle Grow about once a week, and brought them outside two or three times a week, when the weather permitted.

After I installed the arbour I had ordered a while back, and finished “designing” the garden with ornaments and decorative pots, it was time to finally transplant my little seedlings! By the way, I did end up making an online order of garden soil and planter urns for the arbour from Canadian Tire. Everything else was stuff already in the house/garden/shed.

At the end of April, I was satisfied that the risk of frost was over and my seedlings were strong enough to handle being in the ground outside. I added the new garden soil to the flower bed and started transplanting!

If you’re wondering if I buried the biodegradable grow bags with the seedlings, I did not, except in one case. I decided to remove the seedlings from the bags as long as their roots weren’t too intertwined with it, just because I’m not sure if I believe the bags are biodegradable or not. Even if they are, I wonder how long it would take for them to break down. Plus, I want to reuse the bags if I can. There was only one seedling that was pretty well married to its bag, so I left it.

I had so many seedlings (almost 30 trays, I think), and also a baby, and other stuff to do, so it ended up being a two-day process. By the end of the first day, I had gotten most of the border garden in the backyard finished. I spaced many of the seedlings closer together than is recommended because I don’t believe that they will all grow to be the full size of a professional greenhouse/nursery plant, plus I really like a full-looking garden. I’m going for a bit of a cottage garden vibe.

I originally thought I’d begin planting the back rows first and work my way to the front, but I realized that I wasn’t 100% sure where I wanted everything to go, so I worked in sections instead.

I started with the sections I was completely sure about. For example, I knew I wanted the bird bath to be surrounded by violas and pansies. That section of the garden gets late afternoon shade, which violas and pansies would need in Montreal since our summers get so hot. I’ve had flowers burn in the intense sunlight. I also knew I wanted the portulaca in the very front centre of the bed, because the flowers only open in sunlight and that’s probably the sunniest part of the garden.

I also knew the zinnias had to go in the back since they were so tall, but I wanted two different sections of zinnias. And I already had delphiniums in the back next to some roses, so I put more delphiniums in the same area to fill it out more. You get the idea. I found this method of organizing worked much better for me. It was much more manageable. Of course, only time will tell if I made an attractive-looking garden arrangement!

Anyway, on day two, I finished the border garden in the backyard, plus all of the pots and containers, and the displays in the front of the house. I ended up planting some sunflower seeds at the very far left corner of the garden. I had no idea what to put there and hesitated for a long time about whether or not I wanted sunflowers in the garden. I do love sunflowers, but I know that the many squirrels that ravage our backyard will IMMEDIATELY try to destroy them. My plan is just to cut a bunch of them as soon as possible to use in flower arrangements and that might help minimize the destruction.

I’m actually very pleased with how well the garden bed fits all the seedlings I had. As I’ve mentioned many times before, I have never tried growing flowers from seed and had no idea how many I would need. And when I was expanding the bed and creating the planter displays, I was just kind of eyeballing it and making it how I thought it would look nice. Turns out, however many seeds I planted minus how many I lost, was the exact right amount to fill up my garden and various planters, in the front and backyards!

Of course, I wish I had more of certain types of flowers and fewer of other types, but that’s a lesson for next year. I think I’ll end this very long post here and maybe I’ll do a part three “garden tour” in July or something, to show how the flowers ended up doing.

Until then, happy gardening!