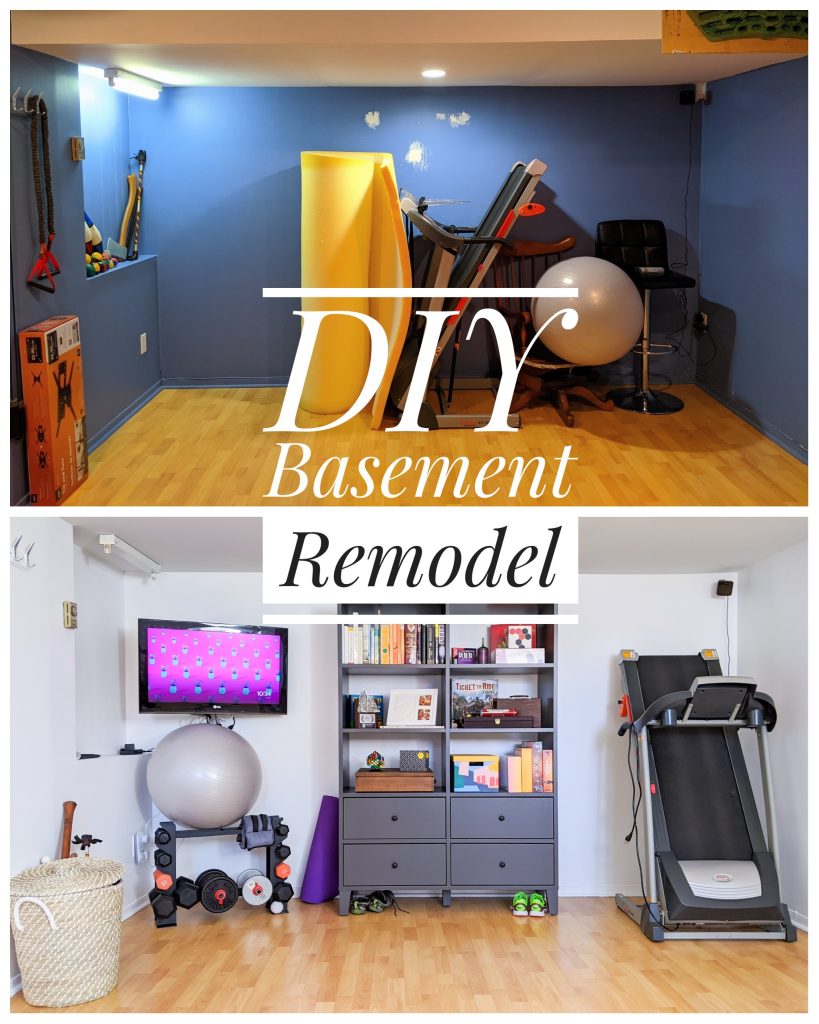 Before I start this post, I should clarify that I’m calling this a “basement remodel,” even though I’m only showing one part of our finished basement. We actually have an open area at the bottom of the stairs that we use mainly for storage and as Kyler’s home office. We also have many storage closets, a closed bathroom and a furnace room. I’m not talking about any of those spaces in this post.

I’m talking about the closed “extra” room we have in the basement that we mainly use as a home gym/Kyler’s VR room. The reason I’m calling it a “basement remodel” is that I feel like this is a common basement feature for most people who have finished basements, and even if you have an open-concept basement, or no basement at all, a lot of people have a multi-purpose room in their home.

These types of spaces present challenging design problems, in terms of clutter and cohesiveness. When there’s no real organizational system or vision, what often ends up happening is a bunch of random stuff just gets thrown in there ’cause you don’t know where else to put it. Throw in the piles of kid stuff we now have, and it turns into a kind of jumbled mess!

Things end up just living on the floor and hugging the walls. All your reject furniture gets thrown in there (there’s literally nothing in those basket drawers). And for some reason, there were a bunch of holes in the wall that the old owners of the house patched over and didn’t bother repainting. There are also multiple pot lights in the room, but one random fluorescent light in one corner, and half of the bulbs are warm-toned and the other half are cool-toned. If I could insert a facepalm emoji right here, I would. All in all, it’s not a cute look.

If you’re thinking to yourself, “this isn’t so bad, there’s hardly anything in this room,” that’s because Kyler uses this room to play VR video games, which requires a relatively clear and open space. A lot of our random stuff that has no home is actually right outside this room in the open area and long story short, we have been doing a lot of organizing and decluttering to get ahold of the basement situation.

Declutter And Paint The Walls

Now if you have a similar space in your home and you just don’t even know where to start, always go through all your stuff and get rid of everything you don’t need or use anymore. I’m talking, a ruthless declutter. I know this is easier said than done for a lot of people, but I believe in you. You can do it.

After you’ve cleaned up your room, it’s time to paint! Not only did we have to paint to cover up the patched holes in the wall, but we were not loving the look of the existing paint job anyway. To be honest with you, I almost never go into the basement because of how dark and scary it feels. I think it’s especially important in a basement to make the space feel fresh and welcoming. So we went with white because it’s the easiest and best way to really brighten up a room, and make it feel bigger.

PRO-TIP: before you paint the room, use some foam sealant in all the little cracks and holes to keep bugs out. Another big reason why I never go in the basement is all the bugs!

This is a bit of an aside, but our vent situation was too ridiculous to not share. The old owners of the house used floor registers that they then attached to the ceiling using finishing nails. WTF? Why didn’t they just get ceiling registers, you know, the ones that are made to actually screw into the ceiling? I’ll tell you why. The rectangles they cut into the ceiling are such a weird shape/the vent is so misaligned with the hole they cut/there’s so much electrical wire in the ceiling that a standard 4″x10″ ceiling register would NOT FIT.

But we solved that problem easily by using a 14″x6″ wall register that could be screwed over the hole without needing to be inserted into it. It seemed like such an easy problem to solve, but I guess the old owners wanted to solve it the more difficult and non-sensical way, like they seemed to solve all their house problems. Oh yeah, and they had stuffed old towels and pillows in the vent to prevent the forced air from coming into the room. I mean, it kinda works, I guess…

Anyway, we replaced the ceiling vent registers, and I actually really recommend upgrading these little touches to a room you’re remodelling because it can make a huge difference in achieving the visual style you’re going for, whether it’s fading the vents into an afterthought or embellishing the room with specially-designed hardware.

They actually make some really cute ones! Yes, that’s right, cute vent registers. We didn’t use those ones ’cause we’re just using the room as a gym/VR room/kid’s play area. But here’s a photo of the vent register we put in the kitchen, just to prove to you how nice they can be:

We also decided to mount the TV to the wall in a corner that is often not used for anything. There’s a sort of niche in the wall (we have no idea what the point of it is) and the shelf part is too shallow to be very useful as actual shelving.

The only good thing about it is the wall recedes an extra few inches there, so if you had something wide like a TV you wanted to tuck away a bit, it could use the space and not protrude as much into the room. By mounting the TV on the wall, you can minimize the amount of furniture you need in an area, and tilt/move the TV closer to the wall or in whatever direction you want.

Speaking of furniture, storage solutions are a necessity in pretty much any room, but especially rooms that will have multiple purposes. We had random free weights and dumbbells just on the floor, an exercise ball that kinda just rolled around everywhere and you had to kick it out of the way, juggling pins/balls, old Halloween props, and all sorts of other bits and bobs that just needed a home.

I had originally wanted some kind of storage unit or shelving unit that could house everything, but I quickly realized that when you have such specific and different stuff that needs to get stored (re: juggling pins, Halloween props and free weights), there’s pretty much no single storage solution that will work for everything.

So instead, I opted to get a weight rack for most of the loose workout stuff, a woven basket for Kyler’s juggling pins, devil stick and Halloween props, and a shelving unit with drawers for everything else that needed a home in the basement. In the end, separating everything into its own storage area was a much better idea!

We actually ended up bringing more items into the room than were in the room originally, but because it’s all stored and organized nicely, it does not feel at all cluttered. The room is still mostly empty!

How To Organize A Shelving Unit

Part of our basement problem was that the open area just outside this room was always super cluttered and overflowing with stuff just stacked on tables and on a rickety old IKEA LAIVA bookcase. That’s right, we were too cheap to even go for the BILLY bookcase. We had to get the cheapest one imaginable.

So in order to help with the storage problem for all our board games, knick knacks, souvenirs, mementos, and Kyler’s books, I got a really big/sturdy shelving unit with some bonus drawers at the bottom. This is a bit of an aside, but I’m gonna share with you my shelf organizing philosophy, on the off-chance that you find the way I organize shelves visually pleasing, like I do.

Often, when we go to organize a shelf or bookcase, we tend to just put things wherever they might fit. Nothing wrong with this of course, but I find things much more aesthetically pleasing when you follow these rules:

Those are the basic principles I like to stick to when I’m organizing a shelf. Obviously, it’s easier to do when there’s only one or two types of things you’re trying to organize, not random Rubik’s cubes, awards, and spinning tops…Still, I think the results are a much more visually pleasing and organized look to what could easily spiral into a cluttered mess of junk!

Our basement windows were pretty old and drafty. Also, you can’t really see it in the photo above, but one of the old windows had a huge crack in it. So we took the opportunity this summer to get them replaced and it makes such a difference!

I originally wanted to replace the roll-up bamboo blinds with some nice curtains, but I actually like leaving the windows bare. If we ever want to turn this room into a spare bedroom, I’ll add some curtains, but for now, I am loving the extra brightness the bare windows give to the space.

We really didn’t do that much to the space, but I think it looks so different now! The whole feel of the room is different. It’s no longer a dank and scary place that I tried to avoid if at all possible.

It’s bright and inviting, the perfect place to do a little workout or for Theo to play in. It’s still mostly empty due to one of its many uses being Kyler’s VR room…(Cue very long and dramatic eye roll). I don’t even know when the last time he used it for VR was. And we use the room for other purposes about 20 times more frequently than he uses it to play VR!

Anyway…I would love to get some seating into this room and give it cozy corner someday. It could even be turned into a bedroom. Who knows?

While I would not call this room “finished” by any means (we still have a weird florescent light box by the TV that I don’t know what to do with), I think this has been a very successful little basement makeover. What do you think?

New blog post is up! Do you ever put on your fanci

I think after Christmas, fall is my favourite deco

I thought I was gonna put away my pastel palettes

When we were on vacation last week, I took the opp

New blog post is up! Travelling during a global pa

I can't sing the praises of bigleaf hydrangeas eno

Do you ever feel the need to edit yourself, either