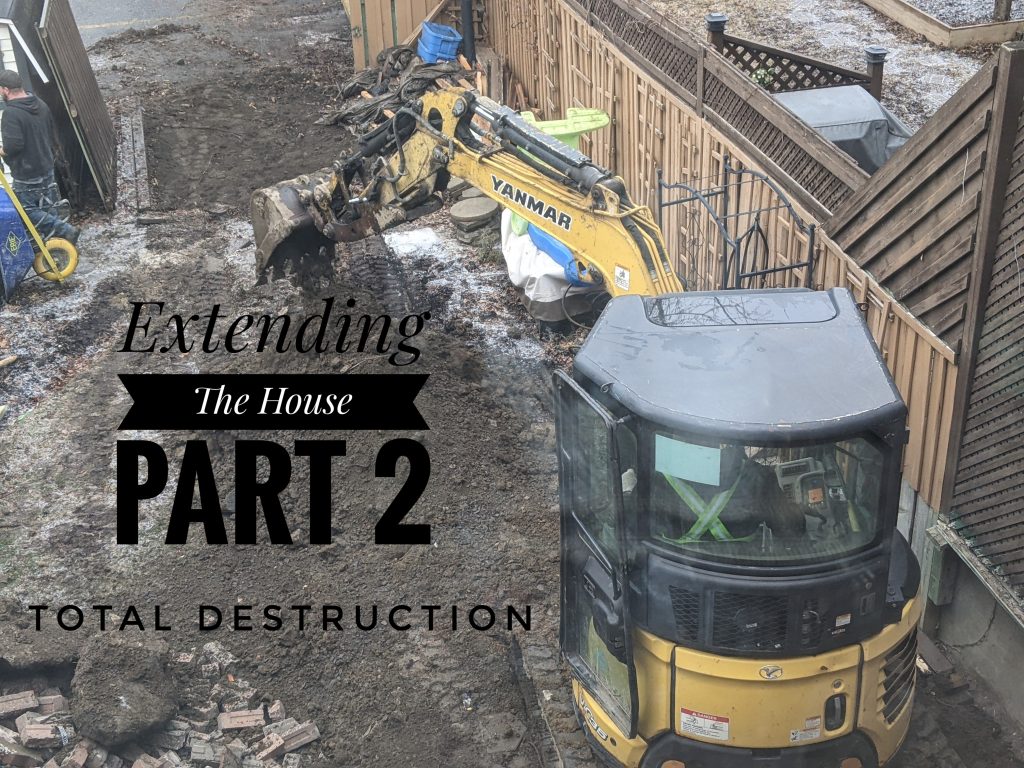 It’s been so hectic around here lately (work, renos, toddler, baby etc.) that I took a bit of a blog break for these past couple of months, but I’m back now, with some exciting house updates!

Spring is in the air and people/heavy machinery have been streaming in and out of our backyard, more or less destroying the place, all in service of building our new, beautiful extension. I’m so happy work has begun! This has been such a long process, and I didn’t dare let myself think it was really happening until things started getting destroyed and torn apart!

The first thing that needed to get done was removing the brickwork from the side of the building, which actually proved to be somewhat of a difficult endeavour. It’s always nice to hear what good condition the house is in whenever we start opening walls and such, because you just never know what you’re gonna find with an old house. The mortar was apparently really strong!

Our contractor initially thought he would be able to remove the brick by hand, but he ended up needing to use some machinery to get it done within two days!

Along with removing the bricks, our contractor also had to finish demoing the basement bathroom and cutting all the plumbing/electricity to the room. This was a fairly straightforward process considering the bulk of the bathroom was removed last year when we did our mold cleanup. The only things left were just the toilet, some flooring, and the washer and dryer.

The destruction part of any renovation is always a little bit jarring ’cause things just look like a huge mess for a bit, but I’m actually very impressed by how clean our contractor and his crew got the bathroom before the excavator came.

Initially, we also thought we would have to either move or dismantle the shed to allow for excavator access into the backyard, but it turns out, we didn’t have to move it! I’ll talk about why this is good and bad when I get more into the new design of the backyard, but turns out, all of the random shed piles we were making in the back and front yards were not really necessary. Although I do appreciate having some gardening equipment accessible to me in the front of the house currently. We haven’t tried venturing into the backyard since work has begun, and you will soon see why.

Bank Contracts And Saving Some Plants

Speaking of access to the backyard, we were always anticipating this was going to be iffy. We have a bank parking lot directly on the other side of our back fence, and neighbours with closed fences on both sides, which means that our only access to the back of the house is via the bank’s parking lot. And you know, banks are famously known for being nice and understanding.

Initially, the manager we spoke to was not very keen on us using their parking lot at all, but after some back and forth with our contractor, we came to an agreement, albeit with many conditions/a contract that needed to be drawn up by a whole team of bank lawyers. Whatever! As long as the work can go forward.

Around the end of March, things really started ramping up. I ended up digging out my favourite hydrangea and just potting it up in the front (along with a rose bush that was pretty close to the back that I thought should get moved too).

I was a bit worried about my favourite hydrangea bush dying after the transplant, but there are some strong looking buds already forming and growing every day. I think she’ll have a bad year, but be more or less okay!

As for my other perennials in the back, I’m not super confident that they’ll all make it, despite me purposefully digging them all up and squishing them all together around the trees and fence line last fall. At the end of the day, they can all be replaced if needed. I’m more concerned about just getting the work done. If they were large, established plants/shrubs, I might feel differently, but they are all only a year or two old, so I wouldn’t be devastated if something were to happen to them. I just think of it as part of the cost of doing construction.

Speaking of destruction to the backyard ecosystem, we were told that the excavator would pretty much destroy the grass we had back there and I was like, “GOOD.” The grass has been a huge pain in our ass since we seeded it. It’s been mostly overtaken by weeds and squirrel pits (seriously, it’s so holey and uneven) and keeping it nice is just more trouble than either Kyler nor I can be assed to deal with. And while I do think there’s a lot of benefit to having the soft ground for the kids and their summer activities, I just don’t find grass to be particularly attractive or worth the trouble.

If we didn’t have kids, I’d probably just extend the flower beds and install a nice flagstone path, but since we do have kids, I’m thinking of installing the path, but doing a low-growing, low-maintenance ground cover in lieu of grass. I don’t know if I’ll have enough time this growing season to test it out this year, but honestly, my gardening goals have dwindled to the bare minimum this year.

If I can get a basic path down and plant some trees by fall, that will be good enough for me!

What an event excavation day was! As luck would have it, Theo actually got sick and had to stay home from daycare and I cannot imagine a better activity for a mildly sick child than watching an excavator destroy your backyard! All three of us literally watched them work FOR HOURS.

In addition to digging out all the dirt around the entire back of the house, the excavator had to jackhammer the whole basement bathroom structure. It was very interesting to finally see how this thing was made, and I gotta say, I am very impressed that it was able to hold itself up for so long, and also support all of us and our summer activities. This was essentially our deck for five years!

And this has essentially been the state of the backyard once the excavator finished with it! You can see why I grew skeptical about the survival of my other perennials and bushes, but that’s okay. Any excuse to go plant shopping, amirite?

Now comes changing the plumbing, adding drainage and re-pouring a whole new foundation structure. The work started on such a high note, a whole week ahead of schedule! I do not foresee this lasting, but as long as this project is finished by winter, I’ll be happy. For now, I’m just counting down the days until I can go tree shopping!