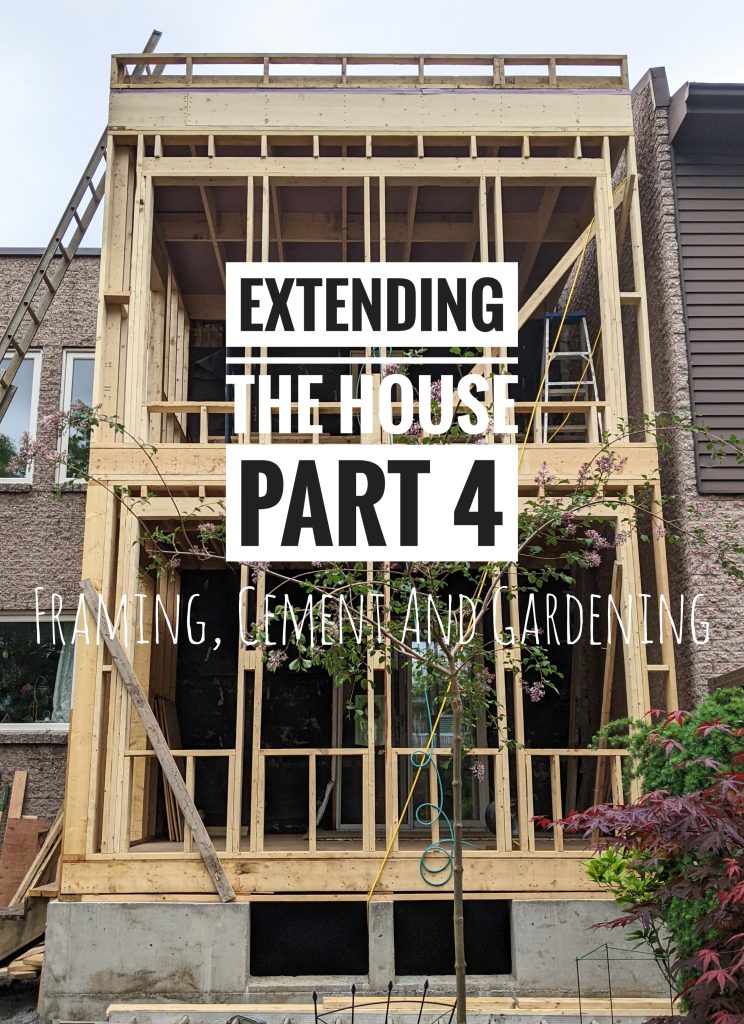 When we last left off, the backyard had been backfilled with lovely, debris-free, weed-free dirt/compost. A gardener’s dream dirt to work with! We were also blessed with no rain for something like two weeks (I say blessed, because water will compact the dirt and make the backyard extremely muddy). I didn’t even need my kneeling pad while I gardened, the ground was so soft!

So obviously, with the backyard now accessible and workable, I attacked my gardening to do list as best as I could immediately.

An issue I had not anticipated was how much the backfill would cover all the existing perennials in the the backyard, despite me having moved them all to what I thought would be a protected area. But it’s okay! I was expecting destruction and possibly losing whatever was left in the backyard. The things I really cared about, I had dug out already, and it’s not like these were really old, established perennials anyway.

And all is not lost! Just the other day, I noticed an old delphinium poking its way out of a new 6 inches of backfill! So who knows what’s resilient enough to emerge through all the new dirt.

Although, I will certainly refill the garden with many beautiful perennials in the coming years, my priority this season is filling out the edges of the garden with some ornamental trees. Trees, generally, will take a long time to grow to their full potential, which is why I wanted to get them in the ground now. So basically, as soon as the excavator left, I was making plans to visit a couple of my favourite garden centres.

Just so you know, I had been designing and mood boarding my garden plan for literally the past two years, waiting for this construction to finally happen before I could pull the trigger. This is more or less the design I came up with in terms of the big bushes and trees that would be in the back.

You can probably tell, I have a thing for trees with a weeping habit. I just think they’re so beautiful and whimsical! Perfect for a cottage garden, in my opinion. I also think it’s really important to adhere to a couple of key points when designing a landscape:

You may think all greens are created equal, but you can have more grey-greens, yellow-greens, dark greens, and of course, I had to throw in shades of red/burgundy as well. And it was essential to me to have a good mix of evergreen structure, flowering trees, and deciduous trees with different leaf shapes and colours. I even found a deciduous tree that looks like a coniferous. It’s so unique and beautiful!

These are the new trees I ended up getting.

Second on my priority gardening list was digging out as many perennials I could find under the backfill and replanting them elsewhere in the garden. I didn’t end up finding many, but like I said, you never know what’ll push its way through in the end!

And lastly, I wanted to make sure I got a my container vegetable garden going, and I still tried to fill as much of the garden beds with annuals as possible. Not just for a beautiful display of colour, but to suppress weeds and prevent the backyard from becoming a total muddy mess with only dirt and nothing else!

You can probably see from the photos that I also got some more perennials in pots that I have yet to plant in the ground, because I’d like them to go closer to the house or in areas that haven’t been defined yet.

I am honestly thrilled with the progress I’ve been able to make in the backyard despite all the construction and it only being May! I was able to plant four out of the five new trees, I’ve got tons of veggies going, and many of the perennials and annuals in the flower beds are putting on tons of growth and already have flower buds. I am so happy with how the garden is looking!

Also, special shoutout to my gardening buddy, who always wanted to “help” in any way possible, haha!

Framing And The Last Cement Pour

I know, I know, enough of the gardening stuff! You wanna know what’s going on with the house! Well, while I was doing all of this work in the garden, our contractor got to work framing the actual extension and the progress has been much faster than I anticipated!

They started with the floor of the sunroom, then quickly put up the first of the outside walls.

They had to stop framing here to get some plumbing rough-ins done in the basement before the last cement pour.

Thankfully, the last cement day went much smoother than the previous pour! If you don’t know what I’m talking about, go back to the Part 3 post and read all about it!

They first tackled the slab for the new location of our heat pump and the base of what will be our deck stairs.

They then, moved onto the part of the foundation that’s up against our neighbour’s house, aka, the wall that failed in the last pour attempt. No hiccups this time!

Finally, they had to pour some cement for the basement floor and then it was back to framing.

Pretty soon, the whole skeleton of the new structure was up!

This is basically where we’re at as of the end of May! It seems like things are moving much faster now, and it’s a good thing too. With baby number two due in July, we don’t have a ton of time left for noise and destruction before there’ll be a new kind of noise and destruction going on inside the house.

Pretty soon, the windows and roof will be installed, and the heat pump will finally be put back in. We’ve had an abnormal amount of above-30-degree weather this month (figures that would happen when we don’t have a heat pump…) and I’m dying for some AC!

Now with interior visible on the horizon, it’s back to designing and fixture sourcing for me!