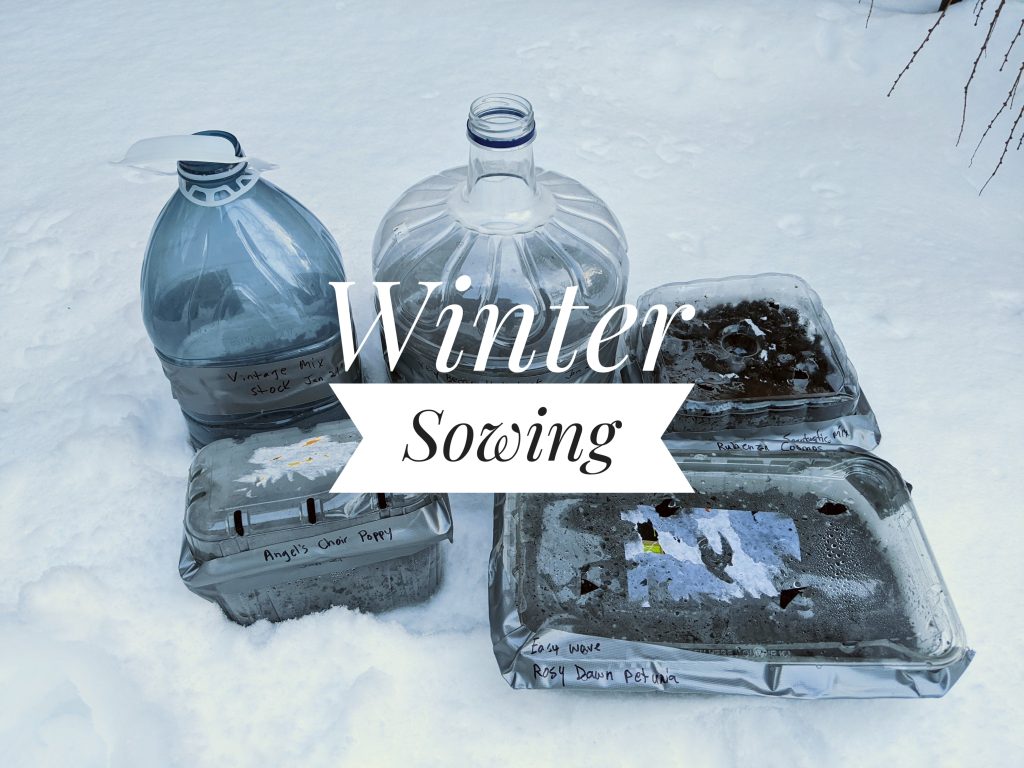 You all know by now how much I love gardening! By the time January rolls around, I have so much pent-up gardening energy, I can’t wait to start my indoor seedlings and baby them every day. Well, little did I know how much of my time my actual babies would be taking up. You would think two kids would just be twice as much work, but it’s somehow four times as much work??? That’s when I started thinking, maybe I should try winter sowing this year!

I’m still a novice, but as I understand it, winter sowing is a low-maintenance way to start seedlings before spring. It involves planting seeds in clear plastic containers and just leaving them outside, in the cold, snowy winter, until you’re ready to plant out the seedlings in the spring. It can offer the following benefits:

I have never been interested in trying winter sowing before, but I’m finding the hands-off seed-starting approach quite appealing this year. You, theoretically, don’t have keep watering them as you would indoors because nature takes care of that. And you don’t have to harden them off in the spring, since they live outdoors already! Those are two really time-consuming chores I don’t know if I would have time to do as often as I should.

And even though we’ve added extra rooms to the house, the second child somehow just negates the extra space??? I’m sure I could squeeze in my seedling trays here and there, but honestly, I just can’t deal with figuring all that out this year.

And I think sometimes, your seedlings will sprout earlier and grow more vigourously using this method since you’re essentially giving them a greenhouse to grow in. I’m interested to see if I can get earlier blooms this way!

Have I mentioned I’ve never done this before? This year is 100% for experimentation. I’ve decided to try winter sowing on flowers I wouldn’t mind not having in the garden, if this doesn’t work out.

I know most people use milk jugs for winter sowing, but we don’t have any clear milk jugs here for some reason. I’m mostly just using some old water jugs we keep around for camping and produce/baked goods containers from our weekly grocery hauls. I like the idea of using lots of different types of containers to see if one works better than others!

Make sure to cut drainage holes at the bottoms and ventilation holes on the tops of all the containers that have no openings. If you use drink containers, you just have to add holes to the bottom and throw away the caps.

If you’re using drink containers, you also have to cut it open about halfway down, leaving a bit intact so it can hinge open. Basically, whatever type of container you use needs to be easily openable to get the seedlings out later.

Plant And Forget About It

Once the containers are prepped, you just fill them with soil and plant some seeds. I was careful not to put too many seeds in each container. You wanna plant a generous amount of seeds in case some don’t germinate, but I don’t want to have to open these again until I’m ready to plant, which means I won’t be thinning all the seedlings.

Also, I think traditionally, people only winter sow perennials or cold hardy annuals, but I’m trying lots of different things. Petunias, hollyhocks, snapdragons, cosmos…again, this year is about experimenting! And I’m only winter sowing things I won’t be too disappointed not having in the garden this year (or things that I know are easy to direct sow later if I have a failed crop).

Once your seeds are planted, you should moisten the soil. The soil was already moist from the bag, but I doused it some more with a mister. It’s better to use something that sprays so the seeds don’t get moved around. And I’m hoping this will be the only time I have to water them, so I’m trying to make sure the seeds don’t dry out by really saturating the soil when I plant.

Now you have to seal the lid with some tape and label it.

Then, get your little garden helper to take the containers outside. Put them in a sheltered location, away from direct sunlight. You don’t want the seedlings to germinate prematurely if you get a couple of really sunny days in February. They’ll never last the winter for sure!

And you basically just leave them until spring! They can get covered in snow, rained on, whatever…it’s all part of the process. Obviously, if they get knocked over, I will right them. And you should occasionally check on them to make sure the soil hasn’t dried out, in which case, you will need to water them. But we get enough rain and snow in Montreal that I’m not super concerned about it.

I’m super curious to see how this turns out! I’m still going to start some seedlings indoors. There are some varieties that I really want to do well, so I’d rather start them indoors where I know what I’m doing and what to expect. But if everything germinates and does well, this could really be a game changer for me.

Could this be the last year I do indoor seed starting??? Stay tuned for the Winter Sowing Part 2 post where I’ll update you on the progress of all my containers!